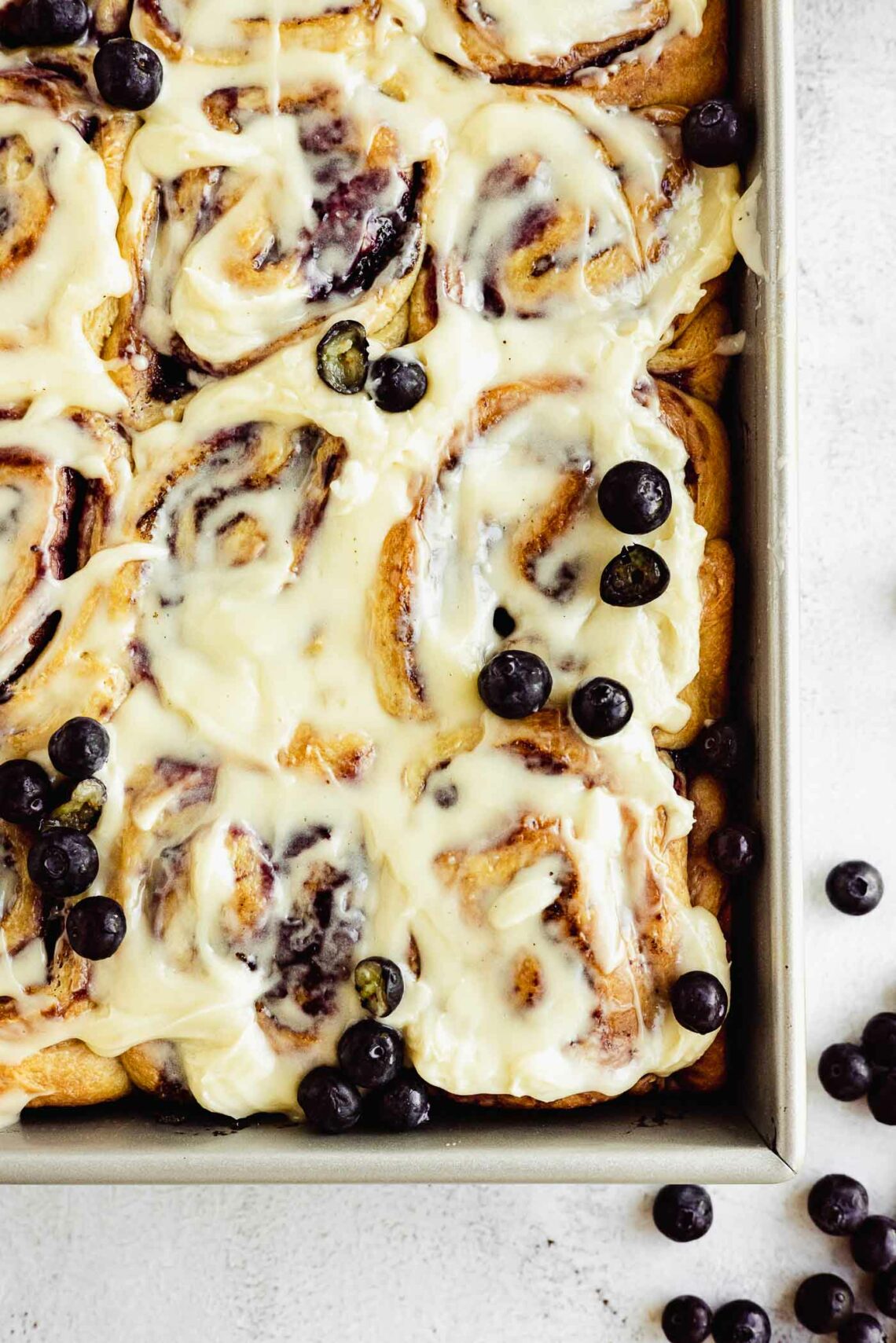 These blueberry cinnamon rolls are buttery, gooey, super fluffy, and have the softest no knead dough ever. They have a cinnamon and a homemade blueberry filling – talk about the best of both worlds! They meld together to create a mouthwatering gooey filling. And did I mention how easy it is to make the dough? Seriously – the less effort you put into it, the fluffier and softer they are. This is the perfect breakfast or brunch treat.

Fair warning though, this recipe does get pretty messy from the blueberries. But all of that messiness translates to gooeyness and the perfect moist and fluffy rolls. Oh and did I mention that they are topped with the most perfect cream cheese frosting? Drool!

This the perfect treat for when you want fresh, warm rolls as the sun rises – or for a breakfast in bed surprise for a special someone 😉

This is the perfect, easy, no knead cinnamon roll recipe that doesn’t require any fancy equipment (i.e. send your stand mixer on vacation) and comes together so beautifully! After checking that the yeast is active, you just combine all the dough ingredients until it resembles a very wet dough, and let it rise. After rising: punch it down, roll out, top, roll it up, cut, twist, and bake! The less you handle the dough, the softer and fluffier your rolls will be. Talk about (almost) zero fuss!

This is my go to enriched no knead bread recipe because it always turns out super light, fluffy, and very buttery but requires zero effort. Check out my other no knead recipes here:

These blueberry cinnamon rolls have two separate fillings but they’re both so easy to make, especially the cinnamon filling!

Before starting on the dough, I like to get the blueberry filling done so that it has plenty of time to cool off and thicken some more. To make the filling, I like to just combine all of the ingredients and simmer until it thickens – this takes about 2 minutes after it comes to a simmer. You don’t want to simmer for too long because you still want that fresh beautiful flavour (longer will turn it into a jam).

While the dough is rising, combine the ingredients for the cinnamon filling and stir until smooth. To make this easier I like to get the butter super super soft, almost melted. You can pop the butter in the oven or microwave for a few seconds to soften it some more.

This is my absolute favourite cream cheese frosting for cinnamon rolls. It is thick, creamy, not too sweet, and melts beautifully on warm cinnamon rolls.

To keep the frosting from going all gloopy and runny, I only soften the cream cheese slightly. The butter needs to be softened so that it gets light and fluffy. After beating the butter and sugar, I add pieces of slightly softened cream cheese gradually until smooth. I find cutting the cream cheese into cubes and leaving it out at room temperature for 10-15 minutes works perfectly. I also use whipping or heavy cream to loosen the frosting and make it even fluffier without it getting runny. If you cannot find whipping cream, use half the amount of milk instead.

How to get fluffy cinnamon rolls?

The most important step to getting buttery, light, and fluffy cinnamon rolls is making sure the flour is properly measured. I use a scale to weigh the flour for the most accurate results. A cheap kitchen scale works wonders.

If you don’t have a scale on hand, you can measure the flour properly using dry measuring cups. Mix up your flour with a spoon, spoon it into your measuring cup, and level off the top with the flat edge of a knife without packing in the flour. It isn’t as accurate as using a scale but is the next best option!

My favourite tip however, is to handle the dough as little as possible. The less effort I put into the roll dough, the fluffier they turn out – every time!

How to get gooey cinnamon rolls?

The brown sugar in the cinnamon filling and the moisture in the blueberry filling keep these cinnamon rolls extra gooey. They melt together in the oven to create a bubbling liquid for the cinnamon rolls to cook in and turn into a delightful caramelized sauce on the edges. I have tested this recipe a whole bunch of times so that you can get the most gooey blueberry cinnamon rolls. Dare I say they could be as gooey as Cinnabon?

Is my dough supposed to be this sticky?

The dough is going to be very sticky and a little bit wet as soon as you mix all of the ingredients together. It will look more like a dough after it rests and rises as the flour absorbs more liquid.

If it looks too sticky and runny (like a pancake batter and not like a dough), then add a little more flour to make it resemble a dough.

Why is my cinnamon roll dough not rising?

The first step of blooming the yeast is mostly to just check if the yeast is active. If it does not foam up after being dissolved in warm water and sugar within 10 minutes, then the yeast might not be active anymore. You might need to try a different packet or batch in yeast.

I like to let my dough rise in an oven preheating to 180°C (350°F) for 3 minutes, then turned off. If it isn’t warm enough, the dough will not rise. Do not let the oven get too hot (over 55°C) because the yeast cells will start to die off. This dough never rises on my counter because it is never warm enough for such an enriched dough to rise.

How to cut cinnamon rolls?

My favourite way to cut rolls is to use a piece of sewing string or unflavoured dental floss. You wrap it all the way around the roll where you want the cut to be. Pull on the string to tighten and it will cut through to the middle of the roll.

This way you don’t squish the roll as if you cut through it with a knife. The roll and swirl remain perfectly round with the string method.

How do I cut even cinnamon roll pieces?

To cut 12 even pieces, I have an easy trick. Cut the roll in half, and cut each half in half to get 4 quarters. Then cut each quarter into three pieces. By cutting into halves each time, there’s a better chance that you will get even slices.

Can I use other berries instead of blueberries?

Yes you can! Just substitute the same amount of blueberries for your berry of choice and cook the filling as usual. If you are using a very seedy berry like raspberries, I would strain the filling after cooking to remove the seeds.

Can I use fresh or frozen blueberries?

I used fresh blueberries in this recipe because they were in season, but frozen blueberries will work just as well. The filling gets simmered down into a sauce type filling anyways – no one will notice.

Did you make this recipe? I would love to hear what you think in the comments! 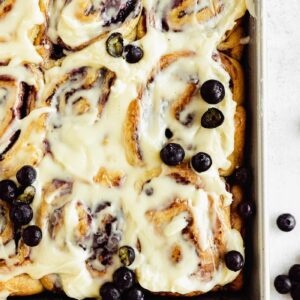 Mary
These blueberry cinnamon rolls are buttery, gooey, super fluffy, and have the softest no knead dough ever. They have a cinnamon and a homemade blueberry filling – talk about the best of both worlds! They meld together to create a mouthwatering gooey filling. This is the perfect breakfast or brunch treat.
Print Recipe Pin Recipe
Prep Time 10 mins
Cook Time 40 mins
Rise Time 1 hr
Total Time 50 mins
Course Baking, Brunch, Dessert
Cuisine American
Servings 12 people 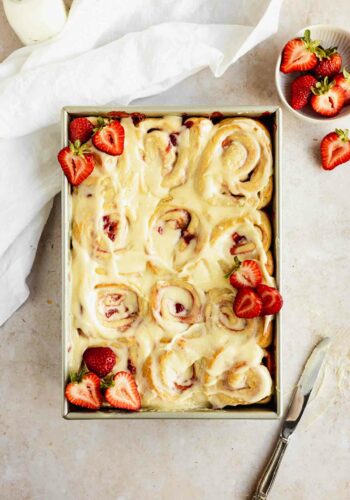 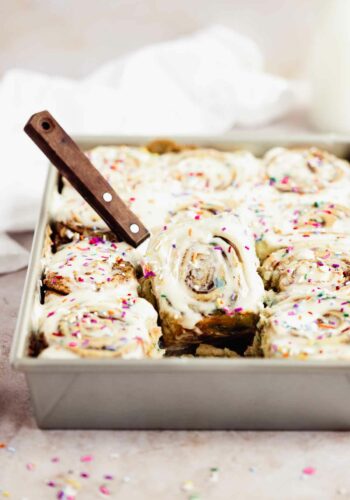 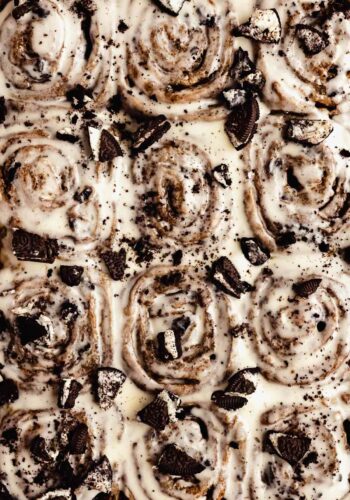